Meet Daniel and his young family

Meet Daniel and his young family, one of the first to buy a brand-new home in the latest phase at Elmsbrook.

A company director and single dad, Daniel was looking for a family home for him and his two daughters to stay with him part-time. Having lived in the area for the last 20 years, Elmsbrook seemed like the perfect option with its own on-site Primary School, a wealth of play areas, green spaces and interconnected cycle and walking paths to the stunning surrounding countryside.

Daniel bought a 5-bedroom detached family home with private garden and garage, as well as a plethora of sustainable eco-features including solar panels and triple-glazed windows, as well as super-fast broadband pre-installed as standard.

The location was a key attraction to Daniel, who wanted to be close to the centre of Bicester whilst benefiting from the green space and community feel.

When asked to describe the development in 3 words, Daniel described it as ‘Clean, friendly and sustainable. Daniel, who knows the area well, added, ‘I like the eco aspects, the location is better. I prefer to be just out of town rather than in the town centre as you’re still close to everything, and buses run through it all the time. It’s easy to get into town by walking, bike, bus or car.’

When describing his new home, Daniel commented, ‘Its well-designed, there’s lots of space and has a good layout. The room sizes and storage cupboards are great; modern and up-to-date. There’s also an app you can use to manage the energy use you use in the house. 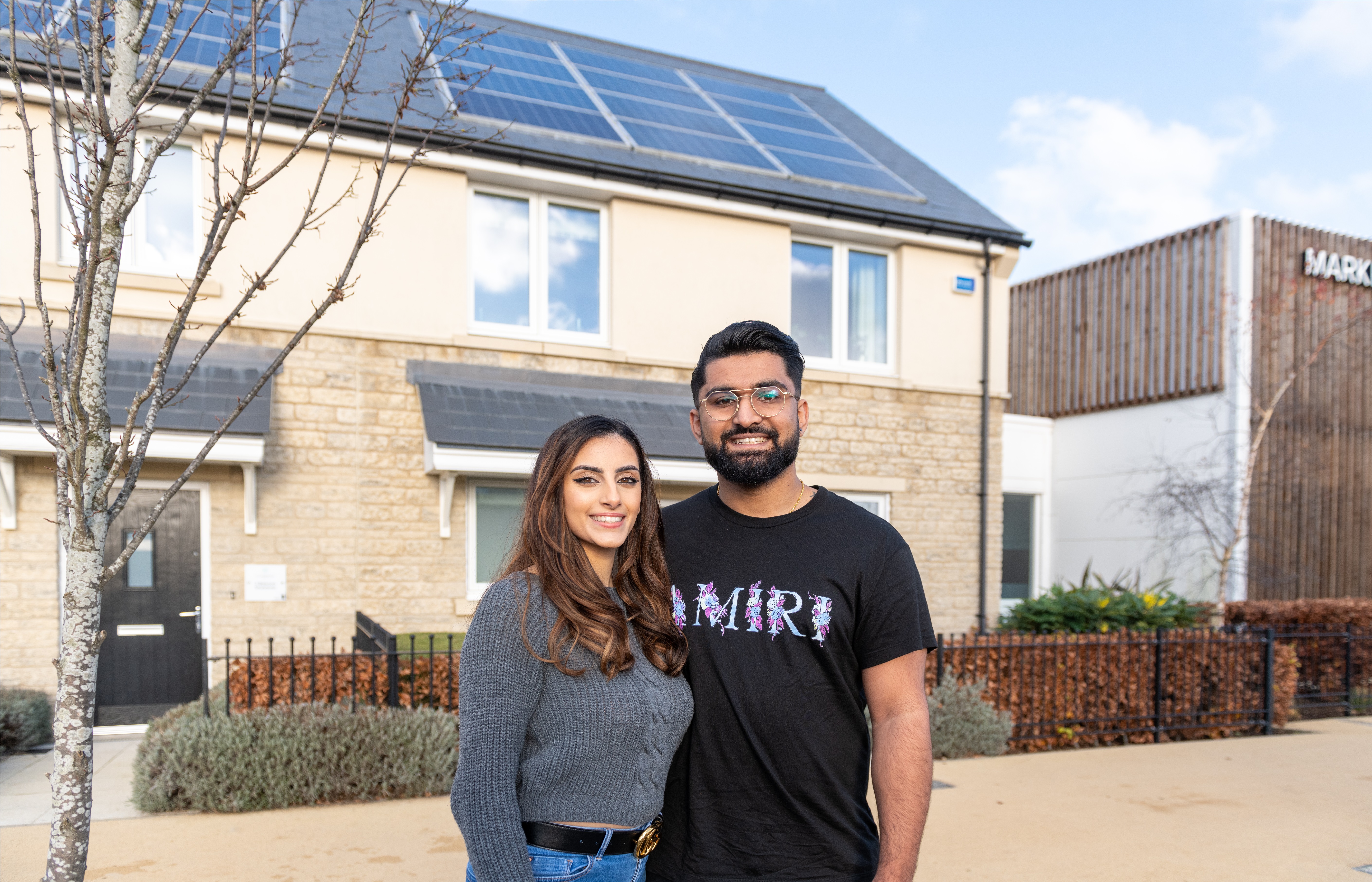 First-time buyers, Janvi and Karan, both young professionals, were looking to buy their first marital home together when they discovered Elmsbrook. Karan was working in London and Janvi in Leicester, so Bicester seemed like a good location, in between the two. The couple are getting married later this year, and wanted to buy their own place, ready to move into as soon as they have tied the knot.

What most attracted you to Elmsbrook?

‘We found it by accident, we were in Bicester village shopping and saw new builds around the shopping centre. Bicester is in between where we both live, when we came across Elmsbrook which we found very homely and friendly. Really it was the sales team Matt & Anil who sold it to us, it was nice to be taken seriously, as we are a young couple. I know it sounds cheesy, but we felt at home with them. Then the pricing and location just worked really well for us. We looked at a few developments in and around Bicester, but every time we visited the other schemes, we found ourselves coming back to Elmsbrook. We did this 3 times!

What 3 words would you use to describe Elmsbrook?

‘Homely, innovative and community. Everyone is so friendly and helpful. Before we even got the keys we already felt part of the community.’

What are you most happy about with your new home?

Janvi: ‘The surroundings, it feels suburban without being in the city. It feels safe.’

Karan: ‘Growing up in London, crime was common but you feel when you’re at Elmsbrook it’s nice to slow down and feel relaxed. And seeing so much greenery is so refreshing. We’ve never seen so many stars in the sky too, we kept looking up at night being amazed by this!

Has your commute improved? If so, how?

Janvi: ‘Mileage is less, so a quicker commute to work for me.’

Karan: ‘Significantly better, I have an office in Staines even though the mileage is more, because I’m not travelling from East London through central out to West, the travel time as decreased by 45 minutes at least. And avoiding city roads, so with this and the decrease in travel time I save a lot on petrol.’

Janvi: ‘I dont know a lot about finance or mortgages, but I felt like Anil explained every step along the way. I found the whole process very straightforward, I don’t think it could have gone any more smoothly.’

Karan: ‘The mortgage advisor that the sales team recommended was really helpful. He explained the step by step process, along with Matt & Anil. Not only did it make the process easy, but I found that we became financially literate, in terms of understanding the process, interest rates and they were genuinely cared and were invested in us. They never tried to upsell to us and there wasn’t a question they couldn’t answer. If you were going into the buying process you’d find it a breeze at Elmsbrook.’