FABRICA and Rydon have launched the eagerly anticipated second phase of Jigsaw - the landmark regeneration scheme in the heart of West Ealing. 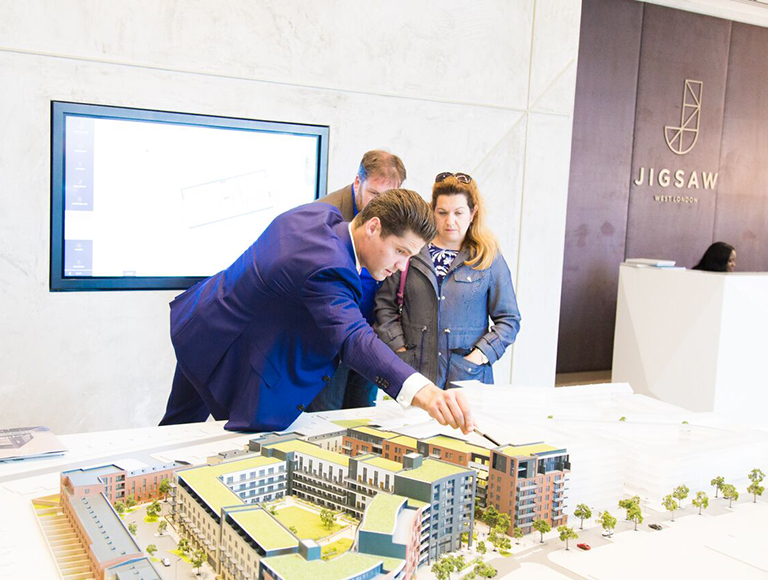 As part of a £166 million regeneration mega project to transform the former Green Man Lane Estate, Jigsaw will deliver a total of 90 one, two and three bedroom apartments, houses and maisonettes. Meticulously designed award-winning Conran and Partners, one of British design’s most pioneering architects, interiors and design studios, this development will span over 5 hectares, providing 770 high quality new homes.

Nearby West Ealing station will benefit from extensive improvements in preparation for the new Crossrail services in 2019. This new network is set to transform the transport links between Central and East London, dramatically reducing the commuting times to Bond Street (13 minutes) and Liverpool Street (21 minutes). Residents of Jigsaw and West Ealing are set to see lots of change over the coming years as well as a huge capital growth due to the regeneration effects of Crossrail.

Interiors mix a palette of pale oak with neutral contrasting textures and tones, designed to blend harmoniously with carefully chosen fixtures and fittings to produce a timeless and relaxing space. Within each apartment is an open plan living space, which leads out onto either its own terrace or balcony. Residents of Jigsaw will be able to access the landscaped open spaces as well as parking and bicycle storage.

Built with the highest level of environmental standards, each property will boast exemplary levels of insulation and air tightness to keep heating costs to a minimum. This scheme will also benefit from an on-site energy centre, which will produce low and zero-carbon energy by combining both heat and power.

Jigsaw remains true to Sir Terence Conran’s simple philosophy that “good design improves people’s lives”. Just like the name suggests, the concept behind Jigsaw has been developed around the theme of connectivity. Walkways make the connection between buildings via beautifully landscaped gardens, plazas and pedestrian boulevards. In anticipation of the families expected to move into Jigsaw a new and improved primary school will also be built.

“Jigsaw is already transforming the community through the positive impact of architectural design. The first phase has been an effective catalyst for the regeneration of the area and we envisage that this process will continue to advance with the launch of the second phase.

Rosie adds: “Designed with first time buyers, second steppers and families in mind, the mix of property types and array of price points will provide both an aspirational yet accessible new home for many Londoners.”

“West Ealing’s emerging status as a property hotspot has been cemented by its recent upward trajectory in house prices and the area’s popularity is only expected to increase with the imminent arrival of Crossrail. Jigsaw is a great opportunity to be a part of this, offering buyers a quality London home combining superb design and investment potential as well as a highly desirable place to live.”

As London’s leafiest borough, Ealing has over 100 parks and open spaces that are home to allotments, play centres, wildlife havens, tennis courts, football pitches and bowling greens, and is affectionately referred to as ‘heavenly suburbia’. Jigsaw residents will be able to take their pick from Walpole Park, Pitshanger Park, Lammas Park and Dean Gardens, all within easy walking distance of the scheme.

Often referred to as ‘heavenly suburbia’, Ealing is also known as London’s leafiest borough, home to a wide selection of parks, open spaces, allotments, wildlife centres and sporting facilities. Residents will be spoilt for choice with Pitshanger Park, Deans Gardens, Walpole Park and Lammas Park all nearby.

Over the past few years West Ealing has seen an influx of cafés, bars and retail outlets along its streets and with its fast-improving transport links, is quickly establishing itself as the new hotspot of the wider westerly area. Within easy reach of the site there are plenty of local amenities, including a Waitrose and Sainsbury’s, but for those looking for more retail therapy Ealing Broadway’s shopping centre is just 20 minutes away by foot.

An area ideal for food lovers, the area offers a great mix of fine dining and fresh produce with a local famer’s market open every week just a short distance from Jigsaw. A selection of fantastic restaurants are nearby, including The Drayton Court Hotel, home of London’s largest beer garden, and celebrity chef Marco Pierre White’s favourite, The Walpole, just a little further afield.

Ealing has an array of cultural events taking place throughout the year. From the Summer Festival happening between July to September offering blues and Jazz festivals, comedy shows and a London Mela to the annual film festival, hosted at Ealing Studios.

Improvements to the transport facilities at West Ealing have caused a multitude of businesses to flock to the area, bringing with them excellent employment opportunities. It only takes 15 minutes to get from West Ealing to Paddington by train and with the completion of Crossrail in 2019 links between Central and East London will become much quicker.